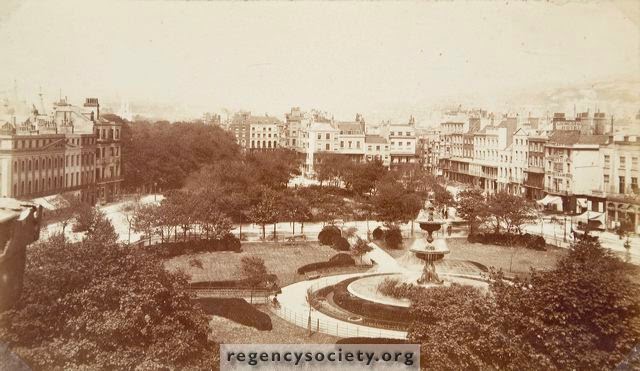 According to the  note to the above photo in the James Gray collection,
" . . . . Russian guns, relics of the Siege of Sebastopol (ended 1855), were placed in the gardens in 1859 and were removed during the 1930s." The photograph itself is a rather distant shot but it is just possible to make out one of the guns at the north end of the southern garden. It seems probable that there were a pair of cannon one each side of the north entrance and the 1930's photo is of the other one.

Interestingly, 1859 is also the year in which Brighton's West Battery, near the bottom of Cannon Place was demolished and the guns used there were 36-pounders*. I'm not an expert but I believe those in the Old Steine could be 36-pounders too. It all seems too much of a coincidence. Perhaps the Sebastopol relics were simply stored at the battery for the few years before it was demolished. . . ?

* "The Encyclopaedia of Brighton" by Timothy Carder
at 10:28