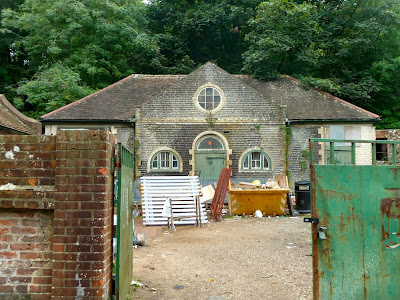 The stable block to Patcham Place has been Grade II listed since 1952 and, up until its disposal with Patcham Place on a long lease, was used as a Council parks depot.

The English Heritage listing description states:-
Stables. C18, at least for the central, cobble-faced portion bounded by quoins. Cobbles with dressings of yellow brick, painted brick, roof of tiles. Gabled centrepiece with central round-arched entrance with brick dressings in the form of quoins and archivolt, now painted, and semicircular windows to either side also with brick dressings; quoins to centrepiece and brick dentil cornice; keyed oculus in pediment; narrow unwindowed wings flanked by quoins; then brick extensions with flat-arched entrances to either end; hipped roof overall. Low range of brick and flint to north with hipped tiled roof.

Planning Application BH2012/00667 from Kingspan Development
for change of use fromYouth Hostel to offices and training facilities stated:-
. . . .  the stables area is envisaged for uses ancillary to the main building and any subsequent alterations that may be proposed to this area will be the subject of separate application in due course. It is intended that these would take the opportunity of ensuring the long term preservation of the building and a viable use in perpetuity that will preserve and enhance the character and fabric of the structure.
This application was approved in Sept 2012. 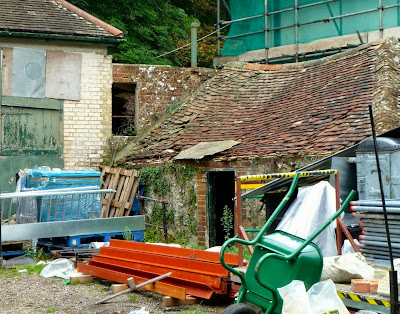 The separate application is still awaited but one feels the new occupiers  can hardly make a worse job of maintenance than the Council.
at 17:41 No comments:


The above simulated view is from application BH2013/00710 for the creation of a new lane, 'Hannington Lane'. To the left can be seen cobbles of the Druid's Head and next to it, on the corner of the entrance to Brighton Square, a recreation of the former 4-storey Hanningtons dormitory building. Next to that is the entrance to a new 26-room boutique hotel to be built over shops on the east side of Brighton Square. This is proposed by application BH2013/00715. A further application, BH2013/00712, proposes rebuilding the west & north sides of Brighton Square with an extra floor to provide 3-bedroom town houses over shops. These proposals would leave only the south side of the Square at its present height (with the exception of the 'dormitory' building. )

Beyond the hotel is the remodelled entrance to the Hanningtons undergound car park and, further on, the 'constant reveal' aimed for by the architects with a medley of facades and roof heights and the pink granite cupola of the Leeds Permanent building constantly in view. The latter is at present invisible from this location.


Passing further down this lane the pedestrian will have the option of turning left  to Meeting House Lane or exiting into North Street past a restored and adapted Puget's Cottage.

To provide the entrance to Hannington Lane from North Street it is proposed to demolish 15 North Street (Timpsons) and provide an open-to the-sky passageway. This will reveal inviting glimpses of Puget's Cottage and the buildings beyond to pedestrians in North Street.

THE NEW CITY COLLEGE WOULD KILL THE SCALE AND GRAIN OF NORTH LAINE IF IT WENT AHEAD. IT WOULD LOOM LARGE OVER THE SMALL SCALE BUILDINGS OF NORTH LAINE. 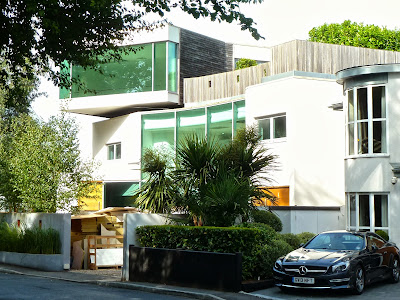 During Kevin McCloud's revisit the house was only barely furnished and appeared unlived in. Kevin obviously struggled to pay some compliments and Barry & his wife admitted that their attitudes to the project had undergone a major sea-change. In March 2010 it was up for sale for £3.5M having cost Barry a total of £1.8M.
at 19:22 3 comments: 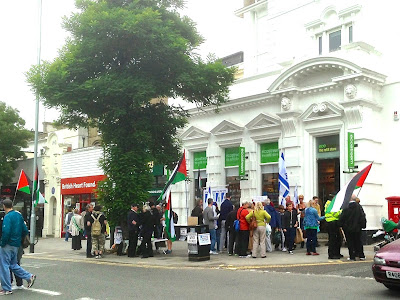 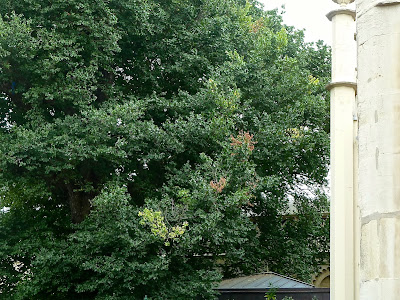 This is looking ominous. I hope the localised dying leaves don't signify disease. It is one of the pair of giant elm trees just inside the North Gate. The sister tree just a few yards away was recognised in 2002 as one of 50 'Great British Trees' in the national heritage. 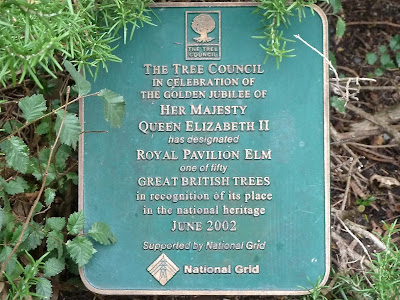 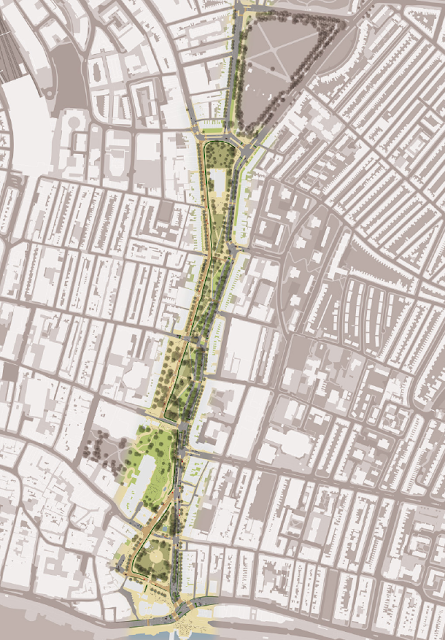 A public consultation on the Valley Gardens master plan will open on 16th September and run until 29th September. One hopes that somewhat better visualisations will be made available by then. The full size pdf of the above illustration can be viewed here.

The aims of the plan are to upgrade the public spaces and improve routes for pedestrians, cyclists, drivers and public transport. The provisional proposals are as follows:-
If the proposals are delivered in full, there will be a slight (7.6%) reduction in the size of the green spaces currently running through the centre of Valley Gardens. However, much of this existing green space has limited benefit from either a biodiversity or recreational perspective, and planners feel that this slight loss will be more than compensated for by the overall improvements.

Improvements within Valley Gardens are likely to be delivered in phases over coming years as opportunities arise. However, the project is not just a paper exercise. Funding for initial improvements has been secured through a ‘Better Bus Areas’ bid and this work will start later in 2013. Indicative funding in the Local Transport Plan and funding from various developments in the area also provides opportunities to start improving Valley Gardens in the near future. 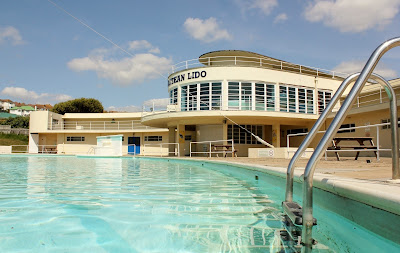 Brighton & Hove City Council have recommended that Saltdean Lido Community Interest Co. are awarded provisional preferred bidder status.  This recommendation follows a selection process which began in March 2013. The recommendation will be put forward to the Economic Development and Culture Committee on the 19th September 2013 and subject to negotiations, preferred bidder status will then be awarded which would need to be authorised by the Council’s Policy and Resource committee.

Rebecca Crook, Chair of the CIC, said “Of course, after a 3.5 year campaign we are overjoyed however this is now the start of even more hard work but we are ready for the challenge ahead.  The building and swimming pool needs millions of pounds spent on it.  From the outside, it might look ok but there are serious structural issues which have left particularly the front part of the building in a very poor condition.  Nevertheless we are very confident in our ability to transform Saltdean Lido into a commercially viable and financially self-sufficient operation for the benefit of local people and visitors alike.”

Peter Crowley, Managing Director of Wave Leisure Trust, said “We are delighted to have the opportunity to partner with Saltdean Lido CIC to re-open this iconic facility for the benefit of the local community. We look forward to bringing our expertise in inspiring active lifestyles to work with the CIC team in making Saltdean Lido a successful and unique attraction again.”

Paul Zara, Director, Conran & Partners Architects who have supported the campaign to save Saltdean Lido since 2010 said “It’s the right decision, of course. The team behind this bid will turn the lido into a national destination, but most importantly it is the heart of Saltdean and a much loved friend. I can’t wait to swim there again, but there’s a lot of work to do first. This is the beginning of a new life for Saltdean Lido.”

The Saltdean Lido Community Interest Company is a community-based organisation, already with almost 1,000 members which is very clear in its objective: to run the lido site and its facilities on behalf of the community, reinvesting profits back into this unique asset to ensure its long term use by future generations.

Rebecca Crook goes on to say “This is real victory for local residents and although there is a long road ahead it demonstrates when communities work together what amazing outcomes can be achieved.  We now have a real opportunity to transform this beautiful Grade II* (star) building and we cannot wait to start work.”

Although the lido site is best known for its pool, the art deco buildings also houses a library and a variety of rooms which are used for a range of classes including yoga, ballet, art and the Saltdean choir. Saltdean Lido CIC plan to develop improved community spaces for groups and provide more library space as well as heating the water of the swimming pool, opening a restaurant in the rotunda part of the building which is currently closed to the public and landscaping and modernising the entire site.  The CIC also plan to transform the lido site into an all-year-round destination with ice-skating during the winter months when the swimming pool will be closed.

Further information can be found on the website including how you can get involved www.saltdeanlido.co.uk
at 15:52 3 comments: 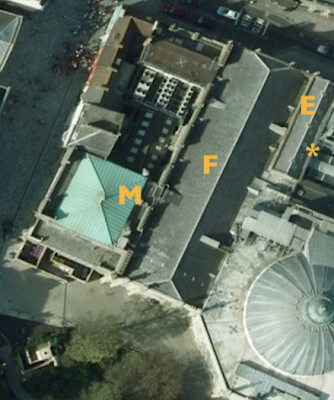 * - Viewpoint of photo below: