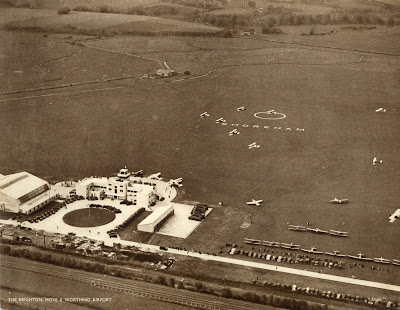 A hundred years ago today the first plane took off from the field that, a year later, was to be officially opened as the first airport in the UK. Ken Fines' book "A History of Brighton & Hove" contains a fascinating account of the early days of flying in the area. It was abandoned to grazing after WW1 but reopened in 1936 as the Brighton, Hove & Worthing Joint Municipal Airport, about the same time that this photo was taken.  It is actually in Lancing but has always been popularly referred to as 'Shoreham Airport'. On their website the present owners add "(Brighton City)", which sounds quite grand.

The Art Deco terminal building by Stavers H. Tilman is Grade II* listed and has appeared in "Tenko", as Singapore airport, in "Fortunes of War", (the excellent dramatisation of the Olivia Manning novels which featured Emma Thompson and Kenneth Branagh), and in "The DaVinci Code". The terminal is situated right alongside the coastal railway line and once had its own station. In 1937, 6000 passengers used the airport but, because of the short runway, which there is no prospect of lengthening, it cannot accomodate the size of aircraft now needed for commercially viable passenger business. Modern use is restricted to private aircraft, flying schools, sight-seeing flights and helicopter and light aircraft maintenance and sales. It is also the headquarters of the Sussex Police helicopter.
at 00:30