Note: The tour of the children's play area starts at 1.50 min.
Looks good so far but the fountain area shown at this stage doesn't seem to be extending over the whole footprint of the original boating lakes. This is important in order to give the bridges a token functionality.
at 23:16 2 comments:

Petition to save a 'green lung'. 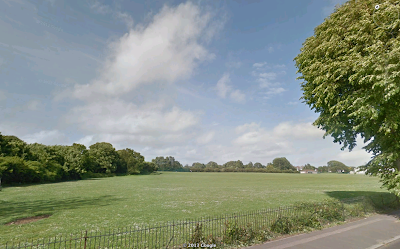 The BHASVIC school field is a wonderful asset. A pleasure to the eye of the passer-by, and a life-enhancing resource to the 3 schools that use it for sports  and local residents for casual recreation. It has been open to the public for 30 years.

Now the field has been identified by Central Government (Education Funding Agency) as the proposed permanent site of the King's School (a Church of England Free School for pupils aged 11-18).


To oppose these plans a petition has been launched here:-
http://www.change.org/en-GB/petitions/rt-hon-michael-gove-mp-secretary-of-state-for-education-drop-proposal-to-build-new-school-on-bhasvic-field 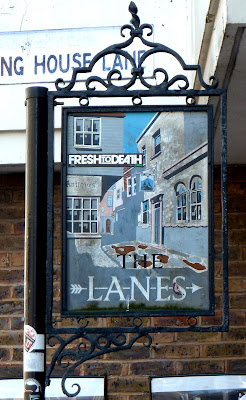 The last of the 50 year-old sign boards still remaining. They are believed to be the inspiration of Dr Clifford Musgrave, one-time Director of the Royal Pavilion Estate,  author of "Life in Brighton" and curator of the famous annual Regency Exhibitions. It is probably no exaggeration to say that these signs, being widely reproduced in publicity material over 50 years, have become world famous and one of Brighton's iconic symbols.
(Inevitably it has been graffitied with a stuck- on label.) 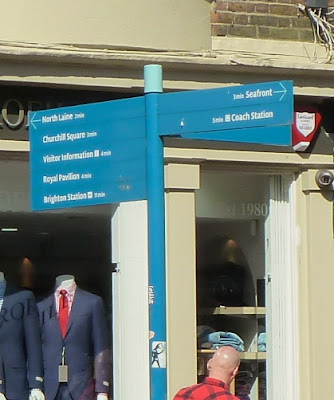 The sign still remaining is in North Street. At the other entrances to the Lanes they have been replaced by these blue finger posts, which although more informative are devoid of any aesthetic or artistic value. Even the colour seems rather jarring in these particular areas  of the Old Town. It is ironic that while one Council Department concerns itself with improving the environment of the Lanes for the pedestrian visitor, another Department is eroding the attractiveness of the area.
at 22:49 1 comment: 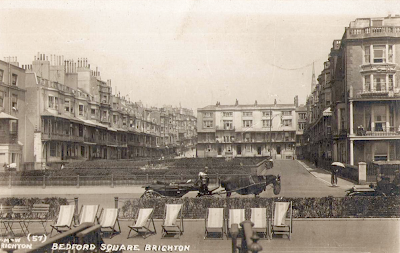 By c.1900 the Square would have been about 80 years old and apparently bearing its age quite well. Over the far right-hand (NE) corner of the Square can be seen the spire of Christ Church in Montpelier Road, burnt down in 1978 by a fire started by vandals. 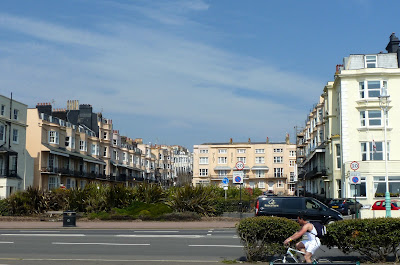 By 2013 all of the properties have been grade II listed together with attached railings where they exist. Properties were added to the English Heritage list at intervals from 1952 to 1988. Evidently not soon enough in some cases as evidenced by missing canopies, balconies, balustrading and other more minor architectural details. Also listed are the two red telephone boxes (K6) halfway up on the RH side. I wonder if they still have working telephones . . . .

The Seven Dials roundabout, one of the earliest in the country, dates from the 1920's. It once had a large circular island such that traffic proceeded in an orderly single file around its perimeter. Later on in the 20th.C, with increasing traffic, this led to long queues at peak times. Several decades ago in an effort to increase the capacity of the junction the size of the central island was severely reduced in size. 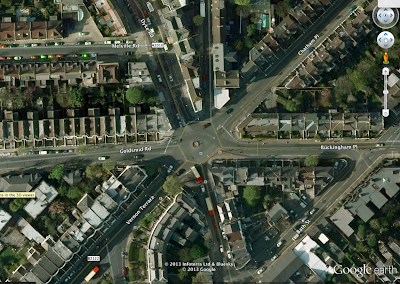 Drivers arriving at the junction nowadays eye up the vehicles on their right, try and make a guess at where they are going, and then make a dash for any perceived lacuna.

Now the wheel has turned full circle. The latest scheme from the Council, on which work has started, will provide a large elongated central island in order to keep general traffic in a single circulatory lane:- 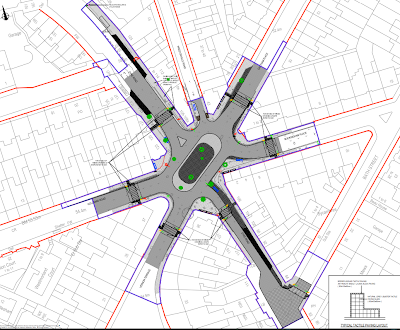 Cyclists will benefit from the slower vehicle speeds and lanes designed so they can occupy the centre of the lane without the fear of being cut up by overtaking vehicles.

The progress of pedestrians around the Dials will be greatly speeded up by wider pavements and replacing the lights-controlled crossings with zebras.

The visual appearance of the area will be generally uplifted by introducing high quality new paving and street furniture such as planters and benches and removing unnecessary railings and street clutter. 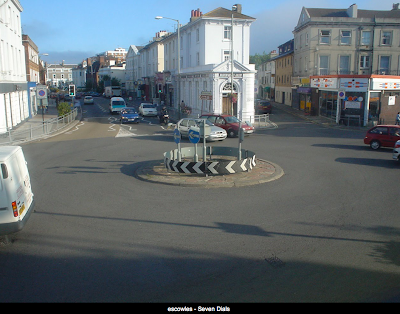 "Madness at the Seven Dials"

"The Elms", a terrace of shops with flats above, took their name from the twin trees shown centre-right in the above photo. In 1933, the date of the photo, the right-hand end of the terrace had yet to be completed and this allows a glimpse of the undeveloped field beyond. The Patcham by-pass had been opened 7 years earlier, which accounts for the traffic free Old London Road. The trees on the left are in the garden of grade II listed Wootton  House. Its flint wall is still there but hidden by cars in the photo below. 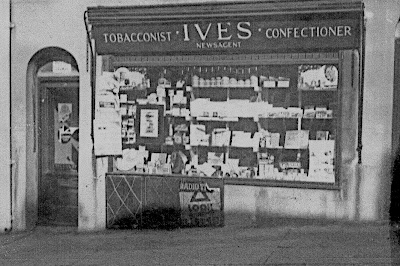 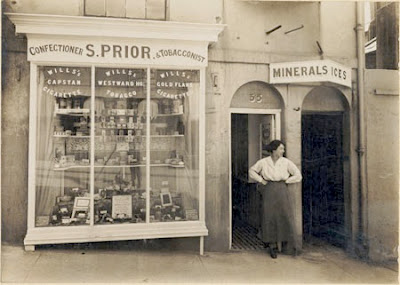 The shop at 35 Spring Street which can just be made out on the right-hand side of the 1908 photograph at Spring Street; then & now. This property was swept away when the Western Road site between Spring Street & Dean Street was redeveloped for the Boots building; see Mitre House post. Spring Street house numbering, which was consecutive south to north up the west side, north to south down the east side, now ends at 32, formerly Jenkins Dairies. 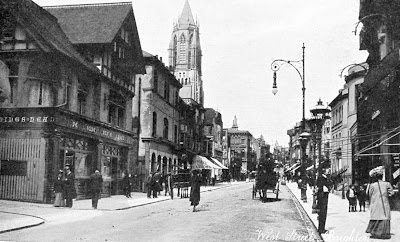 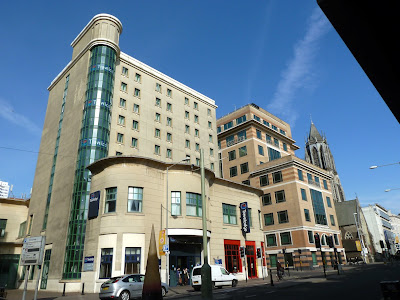