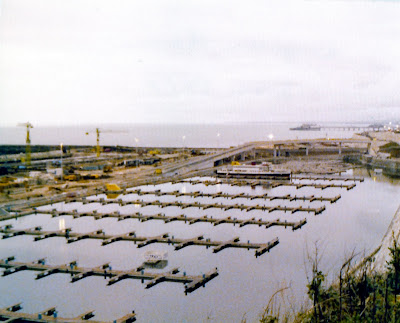 Brighton Marina still under construction in 1977, and in the distance can be seen what later became the Asda car park. It always seemed somewhat illogical to devote an acre of land, wrested from the sea at great expense, to a superstore car park; and the argument was never against better use being made of the land but rather, what form that use should take. The current developers, Explore Living wanted to cram in 7 blocks of flats containing 1300 residential units which would have unacceptably stressed local services and Kemptown roads.

Following much local campaigning, the Council Planning Committee threw out the developer's proposals against the advice of its officers. The developer appealed and a public enquiry held.  The Inspector's report on that enquiry has now been read by the Local Government Secretary, Eric Pickles and Explore Living's appeal has been dismissed.

We must now, as Brian Simpson of the 'Save Brighton' campaign said in his closing statement to the enquiry: ". . look for a developer who will work with the people of this great city to create a unique integrated maritime environment that will be truly exciting for both residents and visitors."