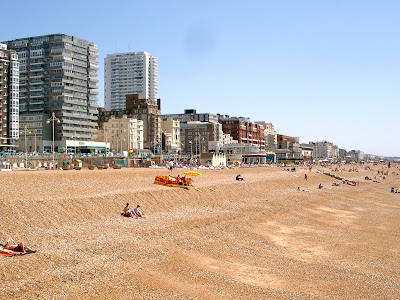 This great bank of shingle stretching from the Peace Statue to the remains of the West Pier and beyond is about 15 feet deep where it meets the lower promenade. It has built up over the last 100 years as a result of the construction of groynes, particularly the large masonry ones during the 19th century.  These groynes intercept the west to east longshore drift and trap the shingle.

An imaginary observer from the early 1900's, standing at the end of the Norfolk groyne where this photo was taken, would hardly recognise this scene. As well as wondering at the changes in the skyline and the missing West Pier, he would be confused by the absence of  the long seawall, now buried in the shingle. The capping of this wall is still visible as a kerb along the southern edge of the lower promenade.
at 17:40 No comments: Links to this post

The Haunting of Hill House

The play of this name is the Festival production by Brighton Little Theatre and what a magnificent job they made of it. It was adapted for the stage by F. Andrew Leslie from the novel by Shirley Jackson. I think it has been filmed at least twice and the 1999 version directed by Jan de Bont used all the techniques of  the  special-effects department to terrorise its audience. How could BLT possibly compete with this? Well they did, and brilliantly.
To set the scene I can't do better than to quote the programme:" The events depicted here are very frightening and may be disturbing to those of a delicate nature. Hill House stands by itself against the hills, holding darkness within. It has stood for 130 years . . . silence lies steadily against the wood and stone, and whatever walks there walks alone."
The audience then enters a dimly-lit, mist-filled auditorium and gropes to find their seats which turn out to provide a viewpoint as if from  behind the fireplace of a dark, wood-panelled drawing room. A corner of the fine set  served, with the aid of ingenious lighting,  for the bedroom scenes where Eleanor ( Andrea Jamieson) is spine-chillingly haunted by her mother. All 7 of the  cast gave excellent performances and Harry Atkinson's very convincing  "Dr Montague" should have a special mention. But the whole purpose of the play is to terrorise and top-billing for the evening must go to the sound effects. Sometimes sudden, making one jump out of one's seat, sometimes carefully orchestrated to create a sense of growing menace, sometimes seeming to involve the whole audience as they reverberated around the auditorium and always spot on for timing, these were a real triumph for designer Beverley Grover and operator  Maria Dunn.
Their next production is Noel Coward's "Hay Fever",  23rd to 27th June.
at 12:43 2 comments: Links to this post 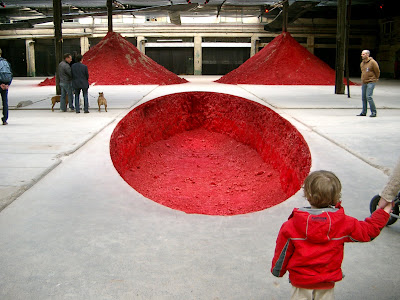 A view of Mr Kapoor's installation at the old fruit and veg. market in Circus street. (The colour of the child's anorak is purely accidental). The work is called "the Dismemberment of Jeanne d'Arc"  and is made up of 5 items covering almost the entire market floor which seem to vaguely mark out a woman's body. Two enormous tortured cylinders lie behind the camera. The two red heaps in the distance are presumably the spoil from the central excavation which although looking spherical in this shot is actually an extremely elongated ellipse.
It is very impressive from scale alone and well worth a visit. I have heard from two separate sources that young children are particularly fascinated by it.

The Festival Programme cover which I criticised in an earlier post now begins to make more sense. Anish Kapoor is the Guest Artistic Director for the Festival with several of his works on display throughout the City. It was obviously deemed appropriate  to have his work featured on the programme cover.
On the other hand one wonders if one of the primary functions of the programme has been overlooked. Surely it should be bold, eye-catching and attractive. Brighton is full of talented Graphic Designers. How about a competition next year?
at 14:36 No comments: Links to this post 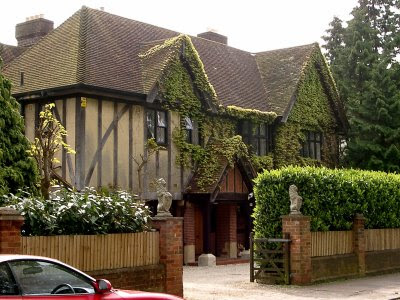