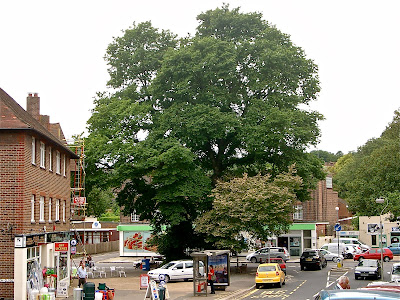 Sad news that the elms that have stood in Patcham Village for 200 to 300 years have been infected with elm disease and will have to be felled. In latter times they have given their name to the parade of shops nearby. Although they appear as one tree from this angle, they are actually twin elms. Last year one showed signs of infection, which was quickly spotted by the City's arboriculture department, and the affected branches promptly removed. Unfortunately the disease spreads through the entangled roots and now the other tree is infected, as can be seen in this photo.

The only consolation is that they were very old trees and, even if they had not succumbed to elm disease, they would no doubt have become increasingly in need of surgery which would have diminished their splendour.

It is planned to plant new trees but it will be many generations before anyone sees anything like this view again.
at 16:17