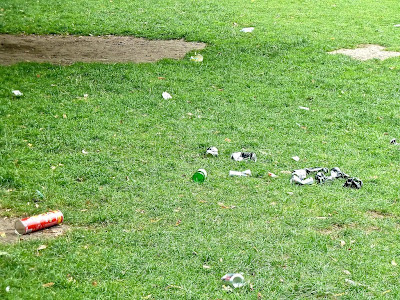 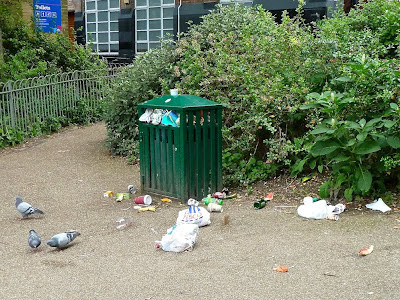 Two hours later some of the litter was in the process of being cleared away by two individuals with black bags and a litter picker. They were not identifiable as Council workmen. One surmises they were simply public-spirited residents.
at 15:29 3 comments:

Lovewise has been telling pupils in religious and community schools that abortion causes holes in the womb, depression and infection and that women who have abortions are twice as likely to get breast cancer.
Lovewise is based in Tyneside and has branches around the country. Its Director, Dr Chris Richards, said that the group had run "a handful" of sessions in schools around Sussex. He declined to say which ones.
But he told the Brighton Argus: "I'm not going to pretend we are morally neutral because we are Christians teaching Christian values."
Schools invite the group to give presentation of up to an hour to children from year 5 to 11.
Bill McIlroy from the Brighton and Hove Humanist group told the paper: "Preaching in Christian schools is one thing because parents know what their children are going to be taught. But teaching such stuff in community schools is disgraceful.
Kate Smurthwaite, the vice chair of the Abortion Rights group, said: With this move towards free and faith schools, the Government has less and less control over the curriculum and what goes on in our schools. To teach this stuff to children who are extremely impressionable is just plain wrong."
Dr Richards added: "Schools are no longer educating children about marriage and relationships, so that's where we come in."
Terry Sanderson, president of the National Secular Society, commented: "More and more of these extremist religious groups are targeting schools. At the NSS we receive a constant stream of complaints about their activities. Surely schools are capable of exercising some kind of quality control over who they expose their pupils to. A quick look at the websites of some of these groups should ring alarm bells – even though they sometimes very cleverly conceal their real agenda."

The White Horse Hotel - then & now

The front door of this Rottingdean hotel was then on its south side. The cliff-top road from Brighton passed in front of the hotel and then turned sharp left up the High Street. After a short distance it then made a right turn to resume its easterly progress to Newhaven.

The hotel was rebuilt in 1934 to the south and west of the old hotel, and the coast road now passes to the north of it. Some of the properties on the near right are substantially unaltered from the date of the earlier picture, but the red-brick properties, on the NE corner of Marine Drive (the coast road), also date from the 1930's.

The White Lion Hotel, said by Timothy Carder to have originated in the 16th century, was rebuilt several times in its life, the last in 1900. The entrance to the hotel can be seen in Queens Road. The entrance on the corner led at one time to a public house and later to a bank. In 1958 it was a branch of Barclays. A modest 'Boots the Chemist' occupied a shop a few doors down North Street.

The whole corner including the superb inter-war Regent cinema & ballroom (not visible) was demolished in 1974 and replaced with the present Boots building. As originally built this had a visible structural frame which at least had a degree of 20th. century architectural integrity. Sadly this was later messed about with so we ended up with the rather bland shed-like structure we see today.

Barclays Bank went down North Street to the 1960's building it still occupies. This was built in portland stone in imposing classical style. No doubt this was intended to inspire confidence; somewhat ironical in view of recent banking scandals.

Sometimes the town's past is wiped so thoroughly that only the  natural topography gives a vague hint that we are looking at the same area . . .

The following petition has been posted on the City Council website here. It reads:-

We the undersigned petition the council to allow free parking to park users for a maximum of 2-3 hours. After this time slot parking could cost per hour or per day. This would ensure enough time for the majority of park users to enjoy the park free of charge, whilst discouraging non-users from parking inside the park.

Brighton Bits comment:-
See "Preston Park parking" for a  summary of the charges in force in the Park at present. From 50p an hour to £3 for 6 hours they surely cannot be a huge disincentive for anyone able to run a car. The main aggravation is the scrabble for change and the hike to the meter. The latter would not be avoided even if  parking was free, as there remains the need to issue a timed ticket to prevent misuse of the parking spaces.
at 12:43 2 comments: 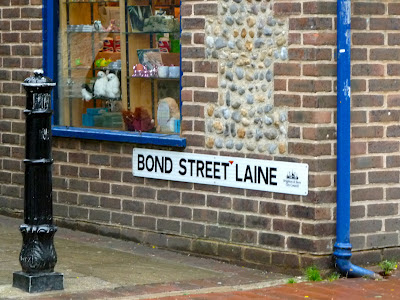 A single complaint against the City Council's proposal to correct the spelling of "laine" was received by the Magistrates Court, and the preliminary hearing of this complaint was held at the court last Thursday.

From the nature of the magistrates' questions as to why the Council was pursuing the name change, it was the opinion of the Council's lawyer that  the Court would find against the Council at the full hearing. Essentially it seems that the magistrates' view was that the change would be for cosmetic reasons only and not as a result of confusion.

Should the matter proceed to a full hearing and the Council be unsuccessful the objector, Mr Roy Pennington, would be entitled to ask the Court for a costs order against the Council which is likely to be for the £500 setting down fee Mr Pennington would be obliged to pay prior to the hearing.

The Council says that, in order to pursue a case at court, they have to consider whether the decision to pursue would pass the public interest test. In view of the likelihood that Mr Pennington's complaint will be upheld at the full hearing and the consequential cost to the public purse the Council will be attending Court next week to agree to the complaint thereby effectively ending the matter.

Presumably, but for the one complaint, the name change would have gone ahead without problems. It is strange that practically everyone in Brighton, including the Council, is in favour of the change but it seems impossible to get it done.  One wonders if the Council would consider making a second mistake. Simply put up a new nameplate with the "i" missing.

Carlton Hill - save the flint wall.

Following an earlier planning application (see Carlton Hill's flint walls) which was withdrawn, the applicant has come back again.  Planning applications BH2012/01811 and 01812 are for 5 storeys of flats and office space on the old garage site next door to the listed Mighell Street farmhouse, and they still call for demolition of the ancient flint wall. This notwithstanding that the Carlton Hill CA Character Statement recognises the visual and historic importance of this wall to the streetscape. The statement describes the wall as imposing, and properly calls for its retention and restoration as part of any development of the site behind.

The architect evidently proposes, with what seems an almost derisory gesture, to compensate for the wall's loss by incorporating a modern flint section in the ground floor wall of the development.

I hope the architect, who gives an address in the Philippines, is told by the planning committee to think again and build behind the wall. He also need to do some homework on local history. He refers to the area as "Hilly Laines"! 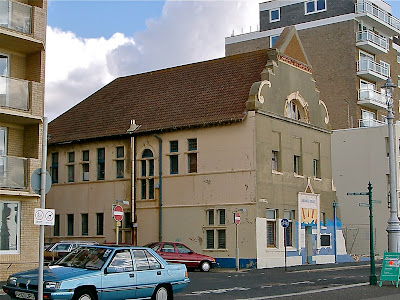 SaveHOVE has posted a new petition on the Council's website:-
We the undersigned petition the council to Urgently produce a Planning Brief for Medina House.

Planning Brief ground rules, over and above existing council policy documents and the Local Plan, are needed for any further Medina House planning applications as a matter of some urgency and in order to help bring the present stalemate situation with its owners to an end. We ask that BHCC considers

(a) Giving first preference to restoration/redevelopment that brings the existing, historically important, building back into use, and if for housing, that it be confined to the present envelope, and car-free.

(b) Considers non-housing use-class designation for the site in order to provide public facilities and/or employment opportunities for this section of Hove’s seafront area, and

(c) Restricts redevelopment at Medina House to the existing height level in order to protect tiny, historic, Sussex Road and Victoria Cottages dwellings (which abut the back wall of Medina House) from unacceptable overshadowing and light loss.

This will put in place a series of environmental changes designed to harness the city’s digital and creative resources while aiming to preserve the tranquillity of the space and create opportunities for performance and social interaction.
The winning team will work with local people, businesses and the council through the Providence Place Forum to deliver the proposal.
The scheme will be given a trial run during the first two weeks of October with the most successful features becoming permanent fixtures.
Volunteers are also invited to take part in this stage of the process and undertake fieldwork to find out how people use the transformed space. Volunteers will receive training during September. Apply between 14 July and 16 September online at www.brighton-hove.gov.uk/livelycities or call (01273) 292352 for more information. 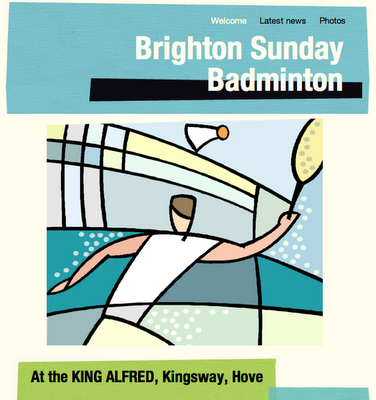 If, of a Sunday, you ever get a strange feeling that you would rather be playing badminton than going to Mass click here.
at 21:31 No comments: 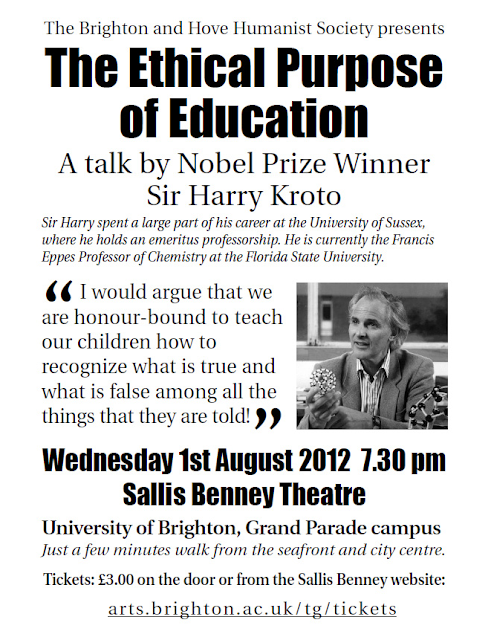 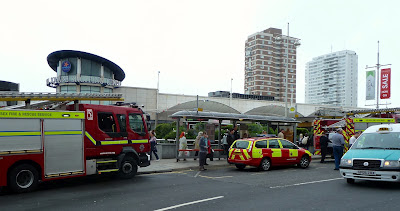 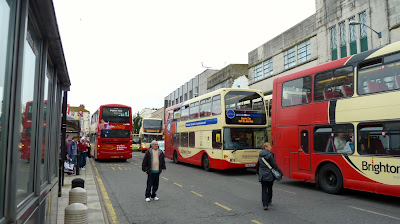 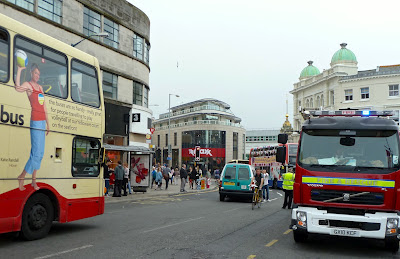 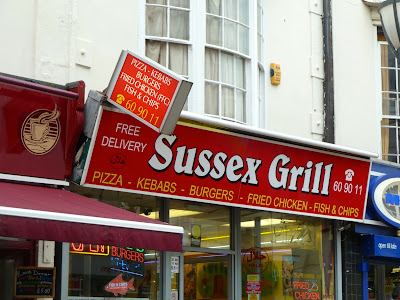 St. James's Street shoppers pass to and fro under this fascia quite unconcernedly and at first sight it could just be taken for an eye-catching gimmick. However the nearer end with the cantilevered display panel is drooping much more than the further end.  Evidently the extra weight and windage, coupled with the recent gales, have tested sub-standard fixings to the limit.

Will it survive a further storm I wonder? 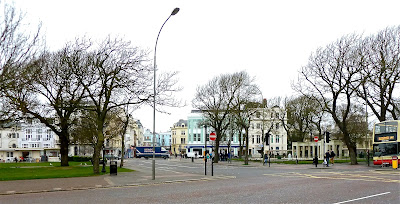 The council’s view is that this area which follows the line of the A23 between the Level and the Palace Pier is spoilt by complicated traffic systems and clutter, is difficult to cross from east to west and visually unattractive.

Suggestions being looked at include simplifying traffic flows, possibly moving all vehicles to one side of the gardens, rather than surrounding them.  This might enable linking the park to key attractions such as the Royal Pavilion, Dome complex and North Laine.

Making the area more pleasant for cyclists and pedestrians is a possibility, along with better access for buses and taxis.

Water features fed by rainwater or the ancient underground Wellesbourne stream would be investigated.  Wild downland flowers and grassland could be featured, as part of ecological improvements helping meet the city’s ambitions to become a UN Urban Biosphere Reserve.

Street wifi could make the space more heavily used by business people and students, alongside areas for picnics, play and performance.

Inspiration is being drawn from projects elsewhere such as Islington’s Newington Green, which was transformed from a traffic island into a popular community park.
at 23:00 No comments: 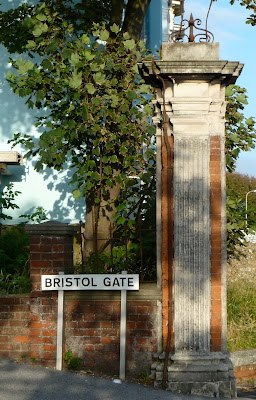 Illustrated is one of the piers flanking the entrance to Bristol Gate from Eastern Road, erected mid-19th Century. They were Grade II listed in 1999 and the pilasters are described as being in the Tuscan style.

There are no visible indications of hinge-fixings so they may never have supported gates; indeed with only a rubble core they may not have been strong enough to bear the necessary cantilevered weight.  Their function was probably purely ornamental. 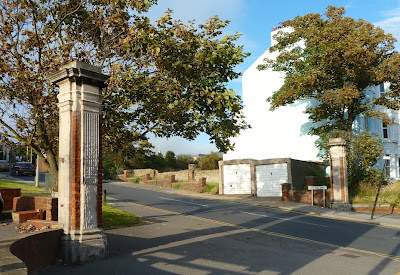 Also listed is the low wall attached to the eastern pier. Both piers are in poor condition with the rubble core exposed in places. They are intriguing architectural history markers. It is to be hoped that they will be protected from damage by large machinery during the forthcoming and lengthy Royal Sussex County Hospital development work.