"Down Terrace" is the name of a low-budget, prize-winning, debut feature film from Brighton Director Ben Wheatley who has previously been known for animated shorts. The film, a darkly humorous crime drama, has been variously referred to as: "Brighton Rock reworked in the style of The Royle Family"; "Shallow Grave as if written by Ricky Gervais"; "Ken Loach meets the Sopranos",  and "A crime thriller directed by Mike Leigh". What more can one ask? It is being screened at the Duke of Yorks on the 15th & 16th August.

The film, starring a host of British comedy talent is set almost entirely in a property in Down Terrace, Brighton which is an otherwise unremarkable street, council-built between the wars, that runs from Queens Park Road to Freshfield Road.

However, it was once before in the news for grimmer reasons.  In 1943, one of the houses received a direct hit from a German bomb:- 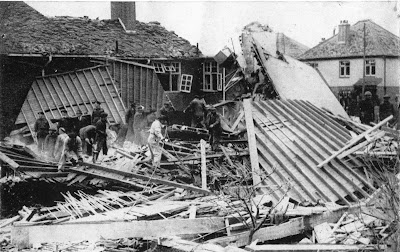