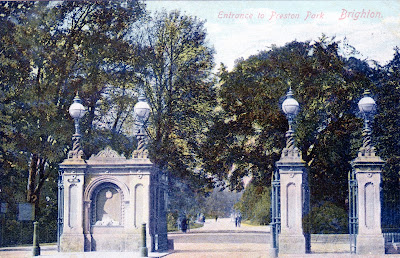 The southern entrance gates from a postcard dated 1915.  The carriage "in" was to the extreme left and the pedestrian entrance to the right. On the extreme right the start of the six foot high iron railings which surrounded the park can just be made out. These were removed as a matter of policy in the 1928 the idea being to 'integrate' parks more into the surrounding area. (Nothing to do with the war effort). The gates would have been locked at night by a park-keeper who lived on site and I can't help thinking that in today's world such an arrangement would be welcomed by most people. It would certainly have helped to prevent the urban plunder and vandalism the Park has suffered in the late 20th Century.

Below is a photo taken from the same viewpoint today. The tree to the extreme left is still there (as I expect are some others) and the curving entrance to the driveway seems to have been preserved. This remodelled entrance dates from the 1930's and contrary to The Encyclopaedia of Brighton article it is clear that the entwined dolphin lamp standards have simply been transferred to the new shorter pillars, not newly designed. However, in the associated  balustrade, the dolphin theme has been attractively reworked. 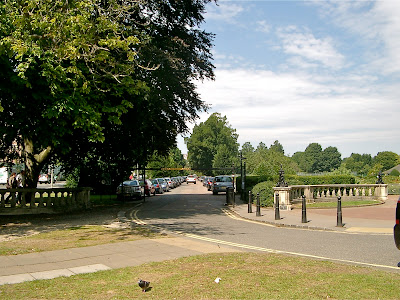