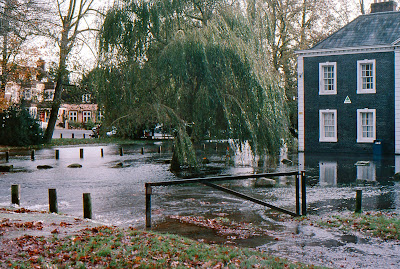 An unseasonal, untopical picture; Patcham Place in November 2000. After weeks of heavy rain the Sweet Hill aquifer broke out near the bottom of Mill Road and Patcham Village was flooded for a week. It was nearly knee deep in places and many of the cellars of the cottages along Old London Road had to be pumped out. It happened again in February of the following year.

Since then improvements have been made to the main sewer which follows the path of the main London Road and the flooding has not recurred. But I cannot recall that, in the intervening period, it has even been seriously tested.  . . . . .
at 11:00