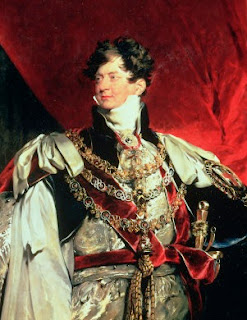 George Augustus Frederick, eldest son of George III, was born on this summer day in 1762. I feel someone should mention it. It seems a shame that Brighton doesn't regularly mark the occasion in some simple way. Something like running up a special  flag on the Pavilion. Perhaps Prinny had some personal pennant that no longer has the Royal prerogative attached to it.
Although he didn't invent Brighton the modern City surely owes a lot in both its architecture and atmosphere to Prinny's life & eclectic tastes.   Travelling down the Old Steine, or strolling through the Pavilion gardens, it is impossible to imagine Brighton without the Royal Pavilion, or even to think of some alternative use of the site that would have, or be likely to acquire, the same iconic appeal.
From 1811 until his accession, he served as Prince Regent during his father's relapse into insanity. He was the King of Hanover and the United Kingdom of Great Britain and Ireland from the death of his father, George III, on 29 January 1820 until his own death ten years later in 1830.
The year of the Olympics, 2012, will see the quarter-millenial of his birth. Excuse for a party maybe?
at 01:10