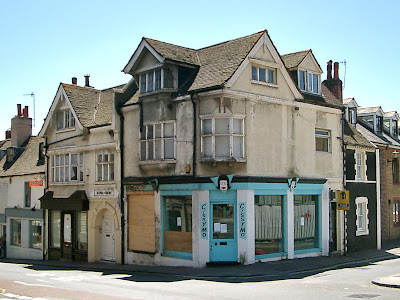 The corner of Church Street and Portland Street 6 years ago. In the notes to his 1967 photograph James Gray the Brighton historian suggested the building dated from at least 1822 and bemourned that it was "unlikely to be with us much longer". Seeing its sorry state in 2004 prompted the taking of this photo. Happily in the last few years this fine example of early 19th.C vernacular has been handsomely restored. So JG's forebodings, although perhaps justified in the light of all the demolitions that were taking place in the 60's, were unfulfilled. The property now has about 200 years under its belt and looks good for another 100 or so.

The little cobbled cottage next door is also original, although all the others in the street have been rebuilt in modern pastiche style.
at 20:22