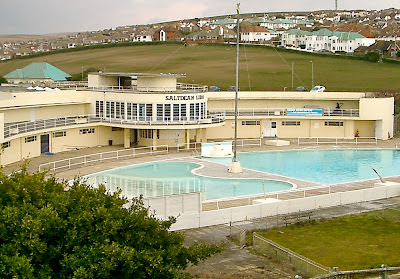 Restoration of Saltdean Lido could be boosted with a commitment of up to £700,000 of council funding which would be used to replace the public library within the building.

A report on the proposal is going to the next meeting of Brighton & Hove City Council’s policy, resources and growth committee meeting on February 9.  It says the money would be secured by borrowing and included in the council budget for 2018/19.

Saltdean Lido Community Interest Company (SLCIC), which was selected by the council and the preferred bidder for the site in 2013, estimates the cost of a full restoration of the Lido complex is now around £12m.

In January 2015 the CIC won a £2.3m grant from the government’s Coastal Communities Fund.  This is being used to restore the main pool and children’s pool, provide water heating and landscape outdoor areas. Around £170,000 that the council secured from the firm which turned Saltdean’s former Grand Ocean Hotel into flats has also gone into the works.

It means the pools are expected to reopen this summer.

A further grant of £576,000 was won by the CIC from the Heritage Lottery Fund in February 2015.  This has been used to work up detailed plans for a £4.2m Lottery bid towards restoring the main Grade 2-star listed building, dating from 1937.  A result is expected in March.

The project would require demolition of an extension housing Saltdean Library. An amount of up to £700,000 would pay for a temporary facility to ensure library services were uninterrupted, as well as an extension providing permanent library facilities.

The committee is also being recommended in the report to grant the CIC a 60 year lease on the entire Lido building and grounds, subject to various conditions being met. Further sources of funding would then need to be found.