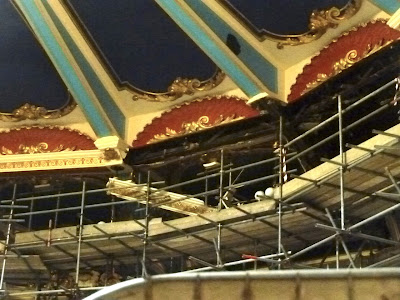 The structural survey of the building's fabric is nearing completion. There are no signs of damp ingress and falls of large chunks of the decorative plasterwork may be caused by slight movement in the foundations. This in turn is tentatively attributed to the 1901 alterations by which theatre architect Frank Matcham converted the original skating rink into a theatre. The removal of two supporting pillars to form the proscenium arch with flytower behind could have slightly unbalanced the structure.

The overriding aim of the project team remains to design around all the important heritage features and to ensure that all work is fully reversible so that, should the opportunity arise in the future, the building can be returned to a live performance venue. It is even hoped to preserve, as a public exit/entrance, the equestrian ramp which still remains in the north-east corner. Up this ramp circus animals were introduced into the auditorium from stables located behind Hippodrome House.

The Hippodrome even in its present state is an awe-inspiring, almost breathtaking, space. Five years have passed since it was closed as a bingo hall. Rumours of other uses have come to nothing. The present proposals have strong financial backing and are the only show in town. If they come to fruition the public will be able enjoy once more something of the grandeur of the dome and the building will be safe for another generation. The project deserves support.