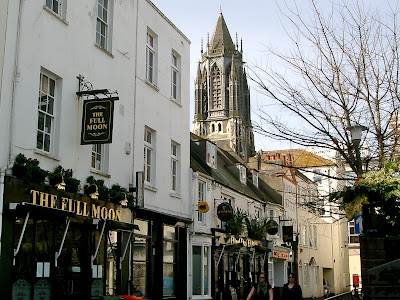 Wandering around Brighton it is still possible to frame an image in which the 20th.Century is not too obtrusive.

St. Pauls is Grade II* listed. Although originally intended to have a stone spire, the tower was finished 1873-75 with a timber octagonal belfry and low spire to keep the weight on the foundations down. In the early 1990's it was found to be infested with pigeons and in a perilous state. The Council was very nervous about it. It was finally restored in 1996 at a cost of £562,000. 70% of this was met by a grant from English Heritage and the rest from the sale of the church's High Altar tryptych 'the Adoration of the Magi' by Edward Burne-Jones. A one-third size reproduction of the painting was specially commissioned and is now on display in the church.
at 07:12