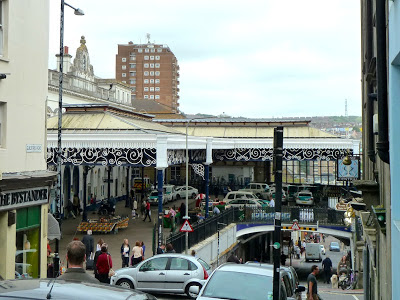 Brighton Station is the gateway for thousands of people to the city every day yet, for the pedestrian, the exit routes, as existing at present, are not exactly convenient or welcoming. Leaving over the Trafalgar Road bridge the pedestrian is confronted by bus lanes; leaving at the west end (near end in photo) one is immediately confined to narrow pavements and, to proceed in any direction but down Trafalgar Street, presented with the need to negotiate heavy traffic. 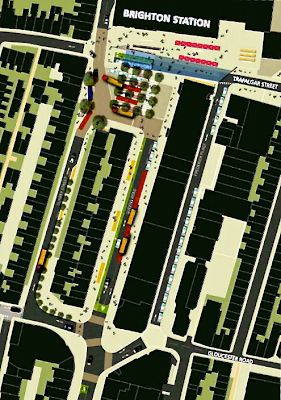 Plans to improve access to and from this busy transport gateway were put out for public comment several months ago and amended proposals were presented to the Transport Committee on October 2. For the pedestrian the biggest improvement will be the pedestrianisation of the entire covered forecourt and the provision of direct access to the east side of Queens Road where the width of the pavements on both sides will be increased by a massive 3 metres.

It appears that taxis after queueing from south to north in Frederick Place and up the south side of Trafalgar Street, outside the forecourt in what was the nearest bus lane.

The listed canopy, added in 1882, casts an unfortunate gloom over the forecourt, especially at the far eastern end, where also the windows over Trafalgar Street are, inexplicably, too high to allow a view over Brighton. Council planners are investigating opportunities with English Heritage and the Railway Heritage Trust to replace, reduce or improve the existing canopy in front of the station to let more light into the area.

Rail partners are considering a plan to reopen a pedestrian entrance between Trafalgar Street and the current taxi area (the entrance on Trafalgar Street is currently blocked by an electricity substation). It is hoped an entrance can be reopened soon, along with a lift to ensure accessibility for all.

The current designs being considered by Brighton & Hove City Council have been shaped with public feedback to give as many people as possible a chance to be involved.  The deadline for commenting on the proposals is Friday 30 November. To comment go to: http://www.brighton-hove.gov.uk/index.cfm?request=c1255734

The next stage in the process is for all feedback and the plans to go to Transport Committee in January for approval to continue to the detailed planning stage. If approved, work may be able to begin in early 2013.