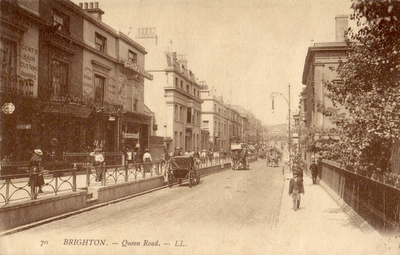 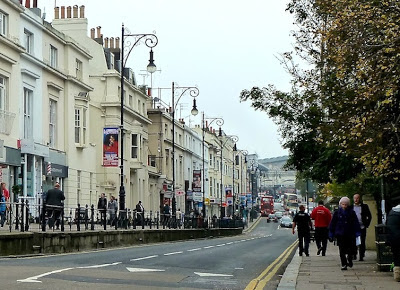 Not a lot has changed in the 100 or so years that separate these two views, partly because, in the modern view, trees on the right-hand side conceal a modern office block. Queen's Road was laid out in 1845 after the completion of the London to Brighton railway. At this point it passes over the west side of the burial ground of the Hanover Chapel which backed on to North Road but had an address in Church Street. The wall of the raised pavement on the left was formerly the wall of the burial ground. The railings on both sides of the road are listed. The row of lamps on the left-hand side (part of the abortive "ocean boulevard" project) are 20th.C reproductions of the originals which can be seen faintly on the right-hand side of the top view.