A revised proposal to improve the area around Brighton Station has been drawn up by Brighton & Hove City Council in response to feedback from the public. The proposal will be presented to the Transport Committee on October 2, 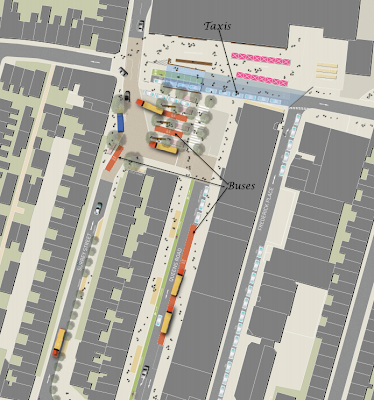 The main features of the new proposal are:-

Buses - will remain in their current arrangement directly in front of the station. Improvements will be made to the design of this bus area and a ticket office added, which will also provide tourist information.

Taxis - A new taxi rank will be provided in front of the station in Junction Road, and a queuing area for taxis waiting to join this rank will be provided in Frederick Place and under the bridge in Trafalgar Street. The arrangement will mean taxis are still close to the main entrance to the station and easily accessible, while the existing rank will be used to create a new public space providing better access to the station for pedestrians, and room for other facilities such as stalls and possibly a new ticket office.

Pedestrians - Pedestrians will have direct access to Queen's Road, without having to negotiate taxis.  Subject to agreement with Network Rail, a new pedestrian link to the North Laine will be provided, and pavements in Queen's Road will be widened by around three metres on each side. Improvements will be made to junctions outside the station to make them easier to cross and the pavement will also be widened in Surrey Street.

Traffic flow - Queens Road and Surrey Street retain their current gyratory arrangement. The current one way traffic flows in Frederick Place and the western ends of Trafalgar Street and Gloucester Road are reversed to enable taxis to wait on a rank in Frederick Place. Amendments to the current one way system in the North Laine are proposed to reduce current levels of through traffic, while retaining access for residents and businesses.

The proposal could be introduced alongside measures to restrict non-local through traffic in the area.  This will also be something for Transport Committee members to consider.

If the proposal is approved by members of the Transport Committee the public will then have an opportunity to comment.

The full committee report can be read here.