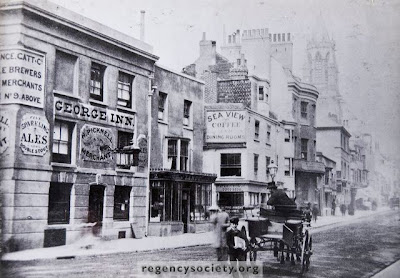 360 years today Charles II landed safely in Fecamp, Normandy, having purportedly spent the previous night in the George Inn, West Street, Brighton, shown here in 1878. It seems that the name of this inn may have changed several times since 1651(perhaps according to the politics of the landlord). An old print dated two years after the restoration in 1660, is said to show it as the King's Head and sometime after 1878 it again reverted to that name which it retained  up until its demolition in the 1930's. The King had been ferried to France by Captain Nicholas Tattersall of Shoreham in his 60 ton collier The Surprise. The dowty Captain presumably laid low after that episode but, after the King was restored, he became somewhat peeved at not receiving due recognition and sailed his boat round to the Thames to picket Whitehall Palace. The King promptly entered the boat into the Navy lists as The Royal Escape and granted the Captain an annuity of £100. The gallant Captain eventually purchased the Old Ship Inn (now hotel) in Brighton where no doubt, embroidered accounts of his exploit greatly assisted trade. Relics of The Royal Escape are displayed in the lobby of the Old Ship to this day. Captain Tattersall died in 1674 and his tomb, with a florid tribute, may be seen in St. Nicholas churchyard.