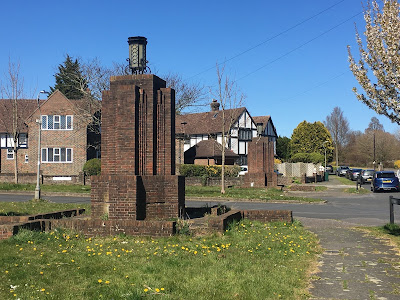 There is some mystery about how the Brangwyn Estate between Withdean and Patcham Village was so named. It was built in the 1930s by developer W.H.Lee who, according to Carder, upset Sir Frank Brangwyn of Ditchling by using his name. However the London Road entrance to the estate was ultimately adorned by two massive lamp columns designed by Brangwyn which suggests a placatory gesture from Lee. It still leaves open the question as to why Lee chose the name in the first place. Was he a friend of Brangwyn or just an admirer of his impressive artistic oeuvre? 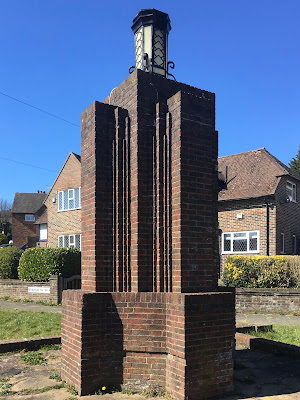 Although the estate is built in the ever popular Tudorbethan style Brangwyn, who had no architectural training, has looked to the fading Art Deco for inspiration and these rather grotesque creations are the result. The lamps themselves are graceful, but whereas they could have been adequately supported on cast-iron lamp standards, they are instead perched like "peas on a drum" on redundantly massive brickwork. Nevertheless the intricate decorative features are clever and must have posed a good test of the bricklayer's skill.

The lamps are never lit. In the 1930s the electrical supply will have used rubber-insulated cables which have limited life and no doubt were never renewed.

The columns are grade II listed by Historic England.