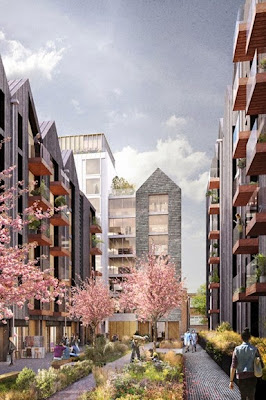 Construction has at last started on the vacant Circus Street site. This follows the developer U+I  securing funding for the delivery of the project with GCP Student Living plc, the UK’s first Real Estate Investment Trust focused on student residential accommodation, and Gravis Capital Management Limited.

A public-private partnership between U+I and Brighton & Hove City Council, this important £130 million project will see a derelict, former fruit and vegetable market in central Brighton transformed into a thriving new quarter and cultural destination for the city.

The development, designed by leading architects shedkm with TP Bennett, will create over 400 jobs and inject £200 million into the local economy over the next ten years.  It includes 142 new homes; 450 student bedrooms; 30,000 sq ft of new office space plus workshops offering creative businesses start-up accommodation and room to grow.

Central to the Circus Street designs is a new public square, with restaurants and shops targeted at independent businesses, creating  new retail and leisure destination for the city. A state-of-the-art dance space will open onto the square and provide a new home for South East Dance, a leading arts organisation and charity.

Brighton & Hove City Council has sold part of the site to the University of Brighton for their plans to be brought forward at a later date.

British firm Henry Construction has been appointed as contractor standing out for their emphasis on offering local jobs and apprenticeships for young people on the construction. Henry has previously worked on The Boiler House at the Old Vinyl Factory in Hayes, another of U+I’s regeneration projects and has also worked on important London regeneration projects including King’s Cross and North Acton.

Piling is currently underway and the majority of the buildings on site will complete in 2019.