First thoughts for the Madeira Terraces. 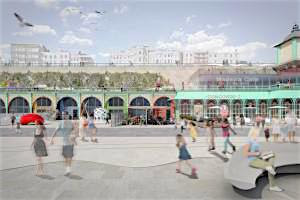 The city council is this week confirming it intends to bid to the Department for Communities and Local Government for between £3m and £4m for kick-starting the regeneration of Brighton’s Madeira Terraces. A bid will be submitted by June 30.

Already council officials have been in talks with civil servants who confirmed the DCLG would accept a bid.  Positive discussions have also been held with Historic England – successor agency to English Heritage – whose support would be crucial.

Picture shows idea of how Terraces could look with business units

The council believes the most likely solution would be sympathetically to integrate small business units into the structure’s arches.  These could suit a variety of uses ranging from cafes to offices or hotel apartment-type accommodation.  Revenue from businesses, in the form of rents and business rates, would help fund the structure’s long-term maintenance. No firm decisions have been made and any changes of use would require planning permission.

The upper terraces could be retained as public promenades.

Details of the plan are still being worked on and are expected to be more fully-formed in time for a second-stage bid in November.

The council has previously estimated a like-for-like rebuilding of the structure would cost up to £30m.  So it is likely additional funding would be needed from other sources, depending on the project’s nature and scope.

The city is hosting a national Coastal Communities Conference on June 30 at the Metropole Hotel. at which council leader Warren Morgan is expected to outline the approach and detail £1 billion of seafront investment underway or in the pipeline.

Last December the DCLG awarded the city £50,000 from its Coastal Revival Fund which is currently being used to devise a masterplan for the seafront east of the Palace Pier.

Cllr Morgan said:  “In principle the plan involves transforming the strip into a lively area full of activity and businesses which generates income to sustain the structure into the future.  This will not be a fast process and, in any case, it’s not practical to start any major works along there when we have so many regeneration projects underway on the seafront.  But we will stick diligently with this so that the Terraces get the most comprehensive conservation programme they’ve undergone and are put on a sustainable footing for the first time in history.”

Built in 1897 and around half a mile long, the Grade 2 listed Madeira Terraces is thought to be the longest cast iron structure in the world.
at 20:28