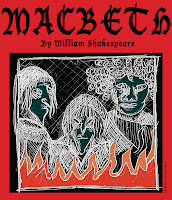 If you like Macbeth, the current production by the Brighton Little Theatre is definitely worth seeing.  They made sense of the words, even the well-known ones (tomorrow and tomorrow and tomorrow. . .).  It was well acted, although Macduff was a wee bit stolid.

They kept the set minimalist, always a good idea with Macbeth, which transcends time and place.  I liked the witches, and found the scene where MacDuff’s family gets murdered, quite moving, with the tiniest hint of potential sexual violence, which is not mentioned in the play but would have happened in reality.  They managed to convey sexual chemistry between Macbeth and Lady M earlier on, which tends to confirm my take on the Macduff family slaughter.

In the small theatre, there was a bit too much coming and going of the soldiers doing the battle at the end, e.g., one lot leaving the stage from the front and up the aisle, the opposing lot coming in the door at the back of the stage, and so on, which verged on the farcical.  However, I imagine this will be easier and more convincing to stage at Lewes Castle.