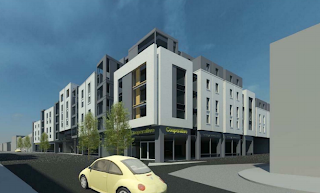 The proposal to demolish the former Co-op department store on Brighton's London Road to create 407 units of student accommodation was refused by the city council's planning committee yesterday afternoon.

After considering the application, the committee decided that the proposal did not justify the loss of the existing 1930s building which is valued by the local community due to its architectural and historic interest.

It was also clear after viewing the proposed design of the building that it would relate poorly to other buildings in the surrounding area and would be an overdevelopment of the site. The building appeared out of scale with neighbouring properties and affected views from Preston Circus and the New England Quarter.

A full assessment of the proposed building’s affect on the neighbourhood and its impact on sunlight levels on the rest of the area could not be made as insufficient information was submitted.

Possible noise disturbance to the area also played a role in the planning committee’s decision. There was not enough information on how the proposed roof terraces and open service yard would affect noise levels in the area. The applicant also did not address the need for disabled parking.