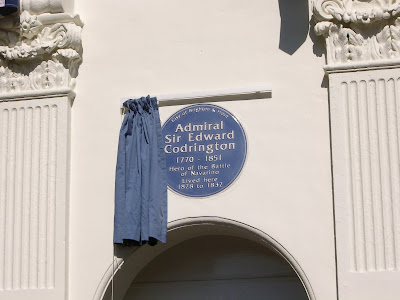 Brighton now has a blue plaque to its own 19th century naval hero. Admiral Codrington commanded the combined British, French & Russian fleets in 1827 for the last fleet action under sail. Our Edward was actually a very naughty boy. He was supposed to enforce a peaceful solution to the Greek War of Independence by blockading the Turkish and Egyptian fleets at Navarino but he interpreted this rather broadly. A drunken or careless sailor in the blockaded ships discharged a single musket shot and our Admiral chose to take this as an act of aggression. The Turks and Egyptians were engaged and their ships destroyed. ( I believe blockading duty could get pretty tedious. Perhaps he just wanted some home leave).

Anyway this put him into pretty bad odour with the British Government but earned the undying gratitude of the Greeks as it became the pivotal action in their long struggle for independence.

The Greek Ambassador unveiled the plaque at Codrington Mansions, 140 Western Road in the presence of the Mayor, members of the City's Commemorative Plaque panel and many local amenity societies. The unveiling was followed by a reception in the garden of Montpellier Hall.