At Patcham Roundabout - then & now 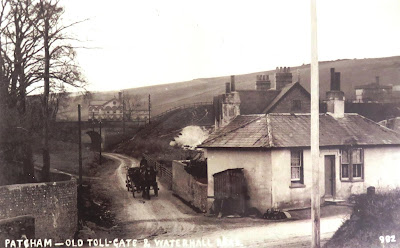 Then. The pumping station, which can be seen beyond the railway line, was built in 1889 so this postcard is dated later than that but before the age of the motor car swept all of this away. Note that the railway bridge is a simple brick arch. On the left can be seen the flint wall of Patcham Place, most of which was demolished when the Patcham by-pass was built in 1926.  See also: Patcham Village - then & now.


Now. With the growth of motor transport came the need to provide the same headroom over the whole width of the road and the brick arch was replaced with beams supported at their ends on the original brickwork which left the width of the roadway unchanged.

The roundabout was part of Brighton bypass scheme completed in 1995. Before then the A23 crossover from Mill Road to Vale Avenue was controlled by lights.