A plaque to Prince Kropotkin 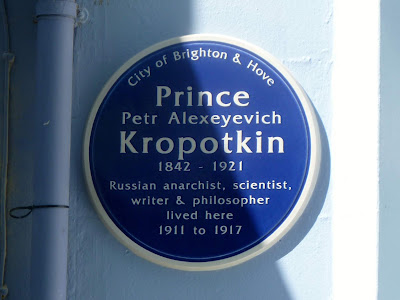 Following a two year campaign by students of the University of Sussex a plaque to this many-sided man was unveiled today at 8 Chesham Street, a house now occupied by a Russian historian, Mrs Barbara Seville.

Kropotkin was a respected intellectual with a world-wide reputation and an audience that included Lenin and Tolstoy. Fascinating details of his life were revealed in addresses from Alderman Francis Tonks, Dr.Gordon Finlayson and Ph.D student Valentinos Kontoyiannis.

Mr Kontoyiannis described Kropotkin's visit to Brighton Aquarium where he observed an upturned crab which teams of its fellow crabs were attempting to right. Kropotkin went on to write "Mutual Aid", in which he theorised that a society could be organised by individuals working in co-operation. This was in opposition to Thomas Huxley's then prevailing theories on the importance of competition in the evolutionary process.

Lloyd Russell-Moyle MP for Kemptown spoke of the lasting relevance of Kropotkin's ideas and philosophy.