Further thoughts on the Mazda fountain. 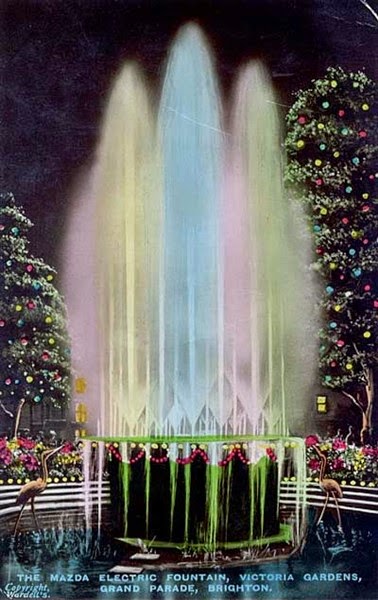 Rivetted boilerplate would not normally be the material of choice for a public art work but the original purpose of the Mazda fountain was promotional. It was designed to flaunt the virtuosity of electric lighting in general, and Mazda equipment in particular, at an exhibition. On being transplanted to Brighton  it continued to do this to great effect as many Brightonians and long-standing residents will recall. The dancing jets illuminated from below by ever-colour-changing lighting redeemed, to considerable extent, its industrial appearance.

It is understandable therefore that the recently mooted suggestion for its removal as part of a Valley Gardens regeneration scheme has produced some strong reactions from those who already feel too much of familiar Brighton is being lost.

However longevity would not have been a concern of the original designers. The lighting was perforce housed in watertight chambers and the performance of insulation and sealants available in the 1920s would not compare with modern standards. Degradation is inevitable in such an item. After several intermittent and only temporary repairs the lighting systems were finally  removed on safety grounds in the 1990s.

The cost of installing a new safe lighting system in such an ageing steel structure would surely be prohibitively high and the money better spent on commissioning a site-specific water-feature. A feature that, like the Victoria Fountain with its dolphins in the Old Steine, makes an aesthetically relevant  yet contemporary statement about the City.