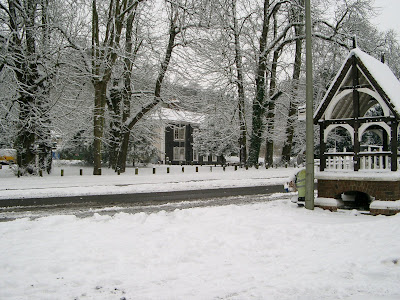 Patcham Place pictured in the snow. Built in the 16th.C the facade was later modified with the black mathematical tiles that can be seen today. It is said to be haunted by one of its owners Anthony Stapley who was one of the signatories to Charles I's death warrant. On the right of the photo is Patcham Fountain erected in 1887 to commemorate Queen Victoria's Golden Jubilee.
Patcham Place is owned by the City Council and up until a year or two ago it had been used as a Youth Hostel since 1939. This shows in the condition of the interior of which very few original features remain. Situated as it is on the A23 on the outskirts of a famous holiday resort it would make an ideal headquarters for the new South Downs Park Authority, and the listed stables could be restored to provide extra space for a Visitor Centre and/or South Downs Museum.
at 20:38